Every week we aim to re home an animal currently being cared for by an animal refuge on the island. The project is supported by professional photographers from around the island, the PR firm Phoenix Media, and The Majorca Daily Bulletin.

It’s Springtime in Majorca. That means blossom, and pollen, and sunshine and blue skies, Easter and … kittens, plenty of kittens. It means kittens born to street cats and family cats that often end up being dumped in the bin. So please, you must keep an eye, and an ear, on the public bins, and random boxes left in car parks or on the side of the road.

If you find some newly born kittens what should you do? Have they been dumped or are they street cats whose mother has gone off to get some food? Here’s some advice from an experienced cat rescuer, Cati Salva.

“If you see kittens inside a box next to a rubbish bin it’s clear that they have been abandoned. It is not so clear if you find them somewhere odd (a plant pot, or in the middle of the street). In this case I advise people to do this:
1) Don’t ever touch them. It could happen that the mum is moving them from one place to another and if they catch your scent some mother cats will reject their babies.
2) Watch from a distance. Stay around somewhere where you can see the kittens but are not scaring the mum in case she comes back for her kittens.
3) If you don’t see any adult cat around in about 30 minutes to an hour (depending on how busy the area is) then yes, you may go ahead and take them because the mum is most likely not coming back for them. Something might have happened or not, but a baby cat can’t stay for long without the warmth of its mother.

“If you take them home you have to keep them separate from your other cats if you happen to have any. This is extremely important. Even if they seem healthy they could have a stomach bug or some other ailments and you need to protect both your own animals and the babies.

“Things vary from caring for a four month old kitten or a new born. The older kittens will have wide open eyes, sharp teeth and be quite mobile creatures. They will most likely be eating by themselves. You can soak some dry cat biscuits in water and see if they will eat. Younger kittens need to be bottle fed. Their eyes will be open at 15 days of age but they won’t be able to move around very easily. If you are unsure as to the age of the kittens then take a visit to a vet to make sure.

“If you are bottle feeding kittens the most important thing is to keep them warm. Until they are a bit older they can’t control their body temperature so they have to have blankets. I usually use one of those electrical pillows on a low setting to keep them warm enough (be sure you’re not burning them of course!). Make sure the electrical cable is tucked away and put a cloth on top of the device to avoid warm plastic on their skin. 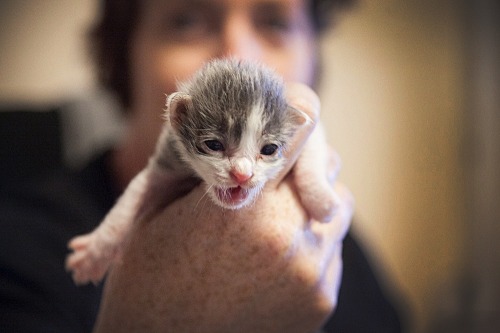 “Another very important thing is: no, cats can’t drink cows’ milk! Not even lactose free cows’ milk. They have to have special cat milk which can be bought at the vets and most pet shops. There are a lot of brands and it doesn’t matter which one you chose as long as you don’t change it once you have started. Baby stomachs are quite delicate and sudden feeding changes may cause diarrhoea and subsequent dehydration.

“To feed them, prepare the formula as indicated and use a baby cat bottle. Some cats don’t latch on to bottles at first, so you have to be persistent and patient. Sometimes they can’t get the milk out, so you may squeeze the tip a bit (or make the hole slightly bigger) so they get to taste one or two drops and get motivated to suck themselves. Some other cats don’t like bottles and people feed them with small (needle free) syringes, but this is dangerous as you could accidentally place milk into their lungs. They should never be placed belly up like human babies It is ideal if they can eat on their paws in a hard surface (you can put a blanket in between). Just think about how the kittens would feed from their mums: that’s the ideal position. After their meal the babies need to be stimulated to urinate and defecate.  If they were with mum then she would usually lick their bottoms. You don’t have to do that! Instead you could use a piece of wet, mildly warm gauze and wipe the area.

“You should expect them to be hungry every 2 to 3 hours at first. Yes, it’s just like having a human baby and can be super tiring work. You can try to make the “night feeds” a bit more substantial by making a slightly thicker formula, but don’t overdo it. The kittens may need bottle feeding up until around six weeks of age. Sometimes they eat at four weeks, but some others don’t. Some vets advise to give the kittens chamomile between feeds and others tell you to prepare the formula with chamomile instead of water. That is completely up to you.

“If you can’t be in charge of the feedings because you work, ask your local vet if they know of anyone that could. They can’t take them into shelters because most of them are not open 24 hours a day, but sometimes they know volunteers that can take them home”.

Every week Pet Project tries to help an animal in Majorca. Pet Project is supported by the Majorca Daily Bulletin, the PR business Phoenix Media Mallorca and several professional and amateur photographers around the island. You can get in touch with Pet Project at http://www.petprojectmallorca.com.